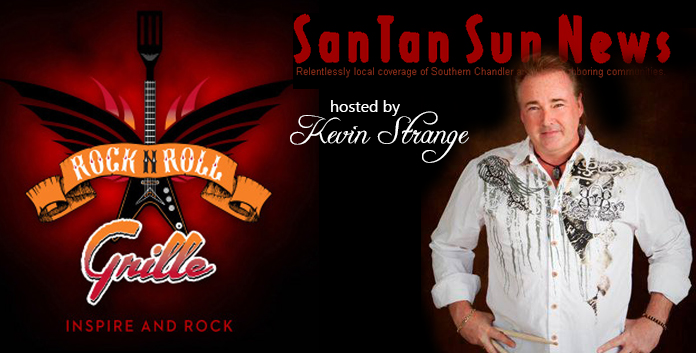 by Laurie Fagen
A new Valley television program hosted by Gilbert drummer Kevin Strange is stirring the pot of cooking shows with an unusual format and a rock and roll soundtrack.

"The Rock N Roll Grille," a creation of musician Kevin Strange, airs weekly at 9:30 am on KNXV-TV Channgel 15, the Phoenix ABC affiliate. Strange says the show gives "weekend grill warriors" new recipes along with a rock and roll band, local guests and a "fresh" attitude.

"We feature great recipes using simple ingredients, great grilling tips and rockin' songs to re-energize the backyard grill," says Strange, who is equally skilled with drumsticks as a spatula. "No Asian fish sauce, no juniper berries, just awesome recipes that taste great right from the grill."

As a Phoenix area cools off and people return to bckyard grilling, Strange is inviting locl guests to show off their avorite recipes. Dishes so far have included Cedar Plank Slamon, Gilled Pizza and Beer Can Chicken. Kokopelli Bistro owner Dennis Minchella recently appeared on an episode, making a sauce from Chianti wine which was applied to Kev's Killer Ribs.

Upcoming guests include the girls from the Tilted Kilt in Mesa; Michael (The Godfather) Farina from San Tan Ford showing his Italian cooking skills with a chicken breast recipe; and Strange's daughter Kylie, 13, will fature deserts made entirely on the grill in a "Sugar and Spice and Everything Nice" episode.

In preparation for Thanksgiving, Strange will show how to cook a turkey on the grill featuring a Cajun injector sauce, and Felice "Mrs. Rock N Roll Grille" Strange will make her debut appearance preparing er New England style shrimp stuffing.

Strange says he's received emails from vegetarians "who are feeling left out," so another show will be dedicatd to veggies on the grill.

Saying "No one is doing this kind of show anywhere," Strange is entering a competitive cooking show market with a local program that pushes the enverlope.

The production team is led by producer/director Gene Ganssle, also a veteran Valley actor. Using HD cameras, crew, extras and guests, they shoot two episodes on a Saturday night in Strange's back yard.

"Our content, creativity and production values are superior to many local programs, " Strange notes. "We also embed our sponsors directly into the content of the show, so we have shorter commercial breaks - we don't want the audience to leave their chairs."

The hope is that the show gains momentum locally for potential pick up by a national outlet.

"We could do well on the Food Network," says Strange, "but I think we're perfect for Spike TV."

The band, called "Fired Up", includes Jim Lemaster of Chandler on lead vocals; and three "Kevins:" Kevin Jones of Gilbert on guitar; Kevin Hein of Mesa on bass; and Strange on drums.

A preview of the show is available on the website .RocknRollGrille.com. For information on sponsorships, to suggest a recipe or make a comment, call 480-330-9908.